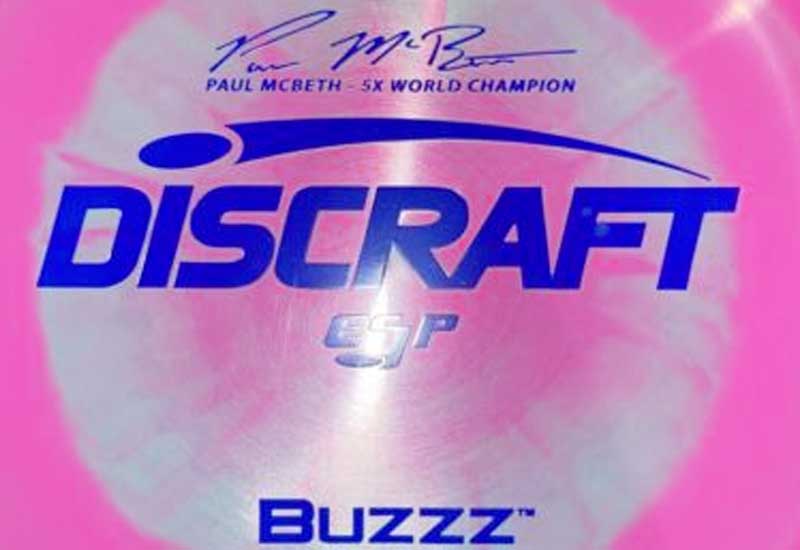 One of the most popular mid-ranges, or even discs of all time. With a stability rating of 0.5 the Buzzz is a surefire point and shoot midrange driver. Choose your target and let it fly. This disc is so forgiving it’s hard to mess up a throw. If you play disc golf sooner or later you will have a buzz in your hand. It’s 5 speed mid-range has a good bit of glide, with a gentle turn and soft fade to finish.

Looking at the numbers

What Do they mean?

It’s flight characteristics are fairly neutral like a good mid is supposed to be. It’s legendarily slightly overstable, its easy for beginners and a sure thing in the hands of a pro. It flies dead arrow straight before a light left fade, regardless if thrown hard or soft.

Once the disc gets beat in a bit more the turn kicks in later. Once you build up some serious arm speed you can use it as a more stable to understable disc as it’ll run straight with less fade when you put the power down. Even an anhyzer wants to end flat.

A Buzzz has great flight. With enough power you can hit it like a fairway driver almost and make 340 feet. I’d like to be able to flip it up to 400 ft just like my man Drew Gibson. Not too shabby.

The Buzzz always wants to shoot a straight line, with very little high speed turn just before it settles with a low speed fade. It’s not easy to find another mid-range with so little mid-flight turn. Most have more fade before it drops. Very usuable disc for ripping 100-300ish ft.

Who doesn’t need a disc that’s gonna hold any angle you put on it, Baby hyzer, straight shots, flicks, hyzer flips, straight shots between trees, short flicks around trees – a very versatile disc. This thing is straight up straight, it’s only Achilles heel, so if you need a wide S-bend disc go get a Roc. Use it as an upshot disc, a fairway driver and a teepad driver.

The Buzzz in ESP Plastic

So what makes the Buzzz Esp stand out? It’s a preference for how the plastic feels. This non- translucent extra grippy plastic is smooth to the touch and has extra durability over the regular Buzzz. If you find the standard buzzz a bit too overstable, the ESP is a little more straight with a twist more to the right (.5 stability rating).

The Buzzz is a low profile disc so it suits large hands, small hands, power grips or fan grips however you prefer to throw. And many people prefer the extra grippiness and durability of the ESP variety, so once again it’s a preference thang. The latest ESP molds are even more durable than the earlier molds.

Good In All Conditions?

Because of the flat low profile and blunt nose it performs remarkably well in the wind. Especially in heavier plastic. Drop the nose a bit or throw more softly to navigate a headwind. Not too much you can do with crosswinds except throw into it if its coming from the left. Pro-D has better grip in the rain but it’s currently out of production. The ESP Z is a bit flippy so it’s  a good one in the woods.

Disc runs are exactly the same, so if you need to replace your old disc grab a new one off the shelf and you’re back in business with very little beat-in time.

There’s so many collector items for true Buzzz fans to splash their money on with everything from numerous seasonal foils and famous franchises incorporated onto the famous disc. Expect anything from The Child (Baby Yoda Mandalorian/Star Wars) to Thanksgiving stamps that can make cool gifts. If you can find it there’s the Paul McBeth Biz Z Malta (an overstable Buzzz with more fade 3.0) available in Esp plastic.

Only the Z-Line has more durability, the ESP meets somewhere in the middle between grip and lifespan. I prefer the ESP plastic above all others, I like the tackiness, no matter what grip I take in my fingers the rim feels so grippy all the way round. Just feels like a solid high performance disc. Sometimes it feels so good I feel like I could eat it….I need to get out more, or is it stay in more???

Which Weight To Use?

Yes and no. Thrown soft it’s a point and shoot missile. With more speed it has some turn before it fades back straight. Until you get the fundamentals down it’s not quite as understable to help a newer payer flip it back to flat.

One reason though it can make a great first disc is it doesn’t take long to learn how to work it. It’s a great form-analysis disc as you’ll quickly figure out how to perfect flat releases, flat to slight hyzers, and smooth hyzers with a soft fade, as It’s such a consistent flyer.

Or if you’re just trying to master bare bones straight shots when you’re just starting out, this is probably the best discs you can bag.